Who is Rich Friesen – The Founder of Mind Muscles Academy:

Rich Friesen started his career as a broker at Merrill Lynch and then EF Hutton. After that, he became a floor trader at Chicago Research and Trading. From there, he broke off on his own, and eventually went on to launch and manage his very own firm.

Not surprisingly, his firm was one of the most consistently profitable groups operating on the Pacific Exchange. Through his own individual experiences as a trader, coupled with his experiences training dozens of traders to work for him, Rich possesses unique wisdom within the trader coaching space. He physically traded in the Chicago and San Francisco pits back before online trading, so he has a hands-on, real world understanding of trading that most of today’s so-called “experts” and “gurus” simply can’t match.

When a trader with his level of experience and sustained success preaches about the critical importance of mindset, I listen. We’re talking about someone who made a living as both an institutional trader and then a retail trader for years, and subsequently had the confidence to put his very own capital into the hands of other traders. These were employees that he personally had to train. Employees that came in with differing attitudes, beliefs, and perspectives – some of which were able to adapt appropriately to the market environment,  while others never did. Over time, this undoubtedly proved one thing to Rich – mindset is everything in trading.

What is Compass 2.0 – The Flagship Course at Mind Muscles For Traders: 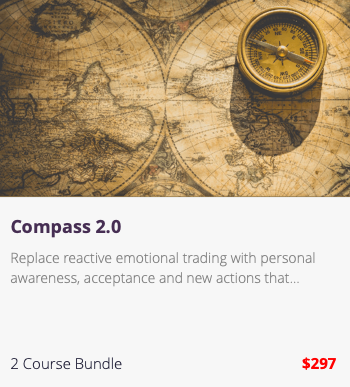 This course is most ideal for new traders to take before risking any money in the market. Unfortunately, most students that come to Rich are well past that point – they’ve already lost thousands of dollars chasing “hot alerts” and “foolproof systems” without success, and have finally decided to take their trading operations seriously. The good news is that it’s never too late to turn things around.

Below are a couple core concepts that Rich teaches his students in order to shift misdirected attitudes, beliefs, and perspectives.

Typically, most traders judge their individual trade performance based solely on the monetary result. All they concern themselves with is how profitable or unprofitable the trade was, and that number determines how well they think they traded. This way of thinking, however, is drastically flawed because it fails to properly account for controllable vs. uncontrollable variables.

The lousy and lucrative trading concept is about focusing entirely on what you can control: your trading plan, system, rules, risk management, and anything associated with tactical and mental execution. To put it simply, a lucrative trade is one where you follow your plan, appropriately manage your risk, and execute your system smoothly without error. A lousy trade, on the other hand, is one where you act impulsively, break your rules, and disregard risk. So no matter the monetary result of any individual trade, they can all still be lucrative. Following the lucrative trade model helps build constructive habits instead of falling victim to destructive ones.

This is a critical concept to understand and follow because most traders are solely concerned about the profitability of each individual trade. But that obsession with the financial outcome of every individual trade is actually what causes them to develop bad trading habits and sabotage their long-term results. For example, instead of sticking with your planned stop order and taking a small loss, you decide to remove your stop and double-down on the losing position instead. The trade continues going against you, you keep adding to it hoping for a rebound, but eventually you have to take a gigantic loss that wipes out your account. This is obviously a lousy trade.

Even if you removed your stop, continued adding to the losing position using most of your account, and the position miraculously bounced back to a large profit – it would still be a lousy trade. This is because rules were broken and risk was ignored. This reckless approach might work out a couple times due to pure chance or luck, which is a factor that makes the market so psychologically tricky. But if these risky behaviors continue, eventually you’ll end up giving all of your previous gains back and more. Being an impulsive and inconsistent trader simply isn’t a sustainable approach. The only path to consistency is a statistical edge and trained mind.

Mind-S.E.T and the Golden Keys:

According to Rich, the Golden Keys are: Awareness, Acceptance, and Action. Using these three keys, you can first become consciously aware of your thoughts, emotions, sensations, and behaviors, accept them without judgment for their positive intent, and then activate new responses that serve you better. At its core, this is what all positive change at Mind Muscles For Traders is all about.

Awareness is the first step required for all positive change. Without awareness, you wouldn’t know that any changes needed to be made in the first place. Many traders get stuck in the same negative and destructive cycles of behavior, and make the same mistakes over-and-over again, all without any conscious in-the-moment awareness of them. In such cases, change isn’t possible. It’s only when you decide to become aware of your shortcomings, mistakes, and failures that you can finally fix them.

Acceptance is the next step and an amazing opportunity to build rapport with yourself. Instead of harshly judging and criticizing yourself for for thinking, feeling, and behaving in destructive ways, you should explore these thoughts, emotions, and actions with curiosity and compassion. Beating yourself up isn’t going to help. What helps is understanding that these habits were well-intentioned. You probably developed them at a much younger age when you had limited options. Now, they simply don’t serve you.

Action is where you decide on new habit patterns you want to create that will actually serve you better within the market. Initially, it will take extra effort to implement these new, more effective patterns. It will probably be physically and mentally draining at first. But it’s critical not to give up and revert back to old, destructive behaviors. The critical juncture in all habit formation is the beginning stage of rewiring your brain. It will try to trick you into thinking the new habit is hard and painful, even though it’s the better route to take.

If You Suffer From Any of These Trading Issues, Then Compass 2.0 Can Help You:

It’s common practice for prospective traders to continuously look outside themselves to gurus, trading chat rooms, holy grail systems, and alert services for answers. But if that approach actually worked, then there would be a lot more successful traders.

It’s only when traders decide to look internally within themselves that true progress can actually be made. The reality is that the market is a dynamic and complex system. There are thousands of variables constantly in flux and acting upon each other. Then traders bring their own dynamic and complex minds into the equation, creating absolute chaos for themselves. So without the proper mindset – one that is in complete harmony with true market characteristics – trading can quickly become emotionally and financially afflictive.

The good news is that a course like Compass 2.0 can help you get on the right track. Instead of only tracking the usual trade data like entry/exit, number of shares, profit/loss, etc., the Mind Metrics component of Compass 2.0 is a mindset journal. Within it, you can effectively track your performance in regard to creating detailed trade plans, sticking to your rules, focusing on your process, reinforcing lucrative trades, and more. Whatever thoughts, emotions, and behaviors are causing you to struggle can eventually be eradicated. And whatever you are currently doing right, you can continue to emphasize and reward.

In the end, consistent trading success is about being in harmony with yourself and the market. If you can achieve that, then there will be no impatience, fear, or lack of discipline leading to impulsive, irrational, and inconsistent behaviors. Unfortunately, your pre-programmed survival instincts and conditioned beliefs about money are most likely thwarting your ability to objectively see and act on market data. Overcoming these hurdles is what differentiates successful and unsuccessful traders. Developing a master trader’s mindset is a continuous work in progress. There is never an end to it. It requires consistent daily practice and training.

So, are you committed to your own long-term trading success or do you prefer short-term emotional gratification instead?