Is The Disciplined Trader By Mark Douglas the All-Time Best Trading Psychology Book? 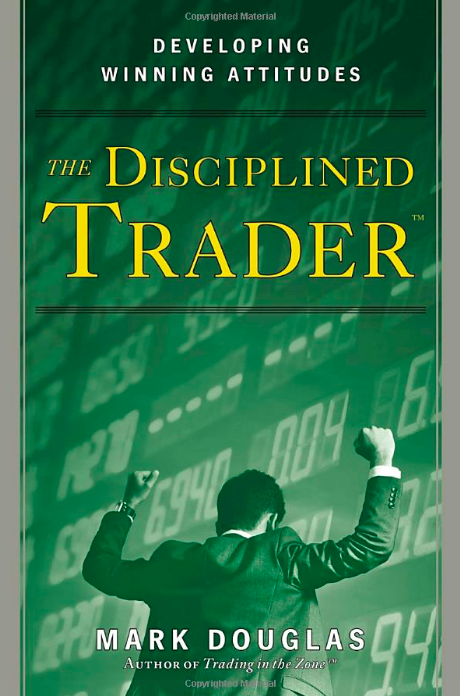 The Disciplined Trader by Mark Douglas is a must-read for all traders expecting to achieve consistent profitability in the market. Although it was published 10 years prior to Douglas’ famous Trading in the Zone, I think The Disciplined Trader is superior in providing practical applications for traders to eradicate their limiting beliefs. It’s undeniable that at some point every trader has to come face-to-face with their underlying psychological blocks, either by choice or what Mark Douglas refers to as “forced awareness”. Sadly, as optimal as it would be for traders to work on developing the proper mindset ahead of time, most choose to let the market teach them the hard way

The mental framework of the typical trader is not aligned with true market characteristics. There is no classic “good” or “bad” in the market. Attributing these terms to specific market moves is only perception. The truth is that the market is completely neutral, yet the typical trader expects it to fulfill their desires on a consistent basis, no matter how impulsive or irrational they behave within it. This is the “conflicting reality” that leads to massive emotional and financial pain for most traders, and the only way to resolve it is to acquire a more objective perspective. In the majority of cases, however, an objective perspective is not adopted from the start. But eventually there comes a point where there is such a large discrepancy between their own beliefs about the market environment, and the actual characteristics of the market environment, that their denials, rationalizations, and illusions ultimately break down.

You Need to Make Changes to the Way You Perceive Market Action:

While actively trading, I suggest that you start taking note of any emotional discomfort you feel. Do you feel anxious, overwhelmed, worried, or frustrated at any point during the process? Become consciously aware of these negative feelings and then write them down. These feelings are a signal that your attitudes, beliefs, and perspectives are out of alignment with the market. They’re an indication of how much you need to change and grow as a trader. Don’t suppress and deny them like most traders do, which only ends up putting them into degenerative cycles of behavior. Embrace and accept them as your starting point for development.

Most traders don’t take the time to understand true market characteristics, and as a result, their experience quickly becomes emotionally and financially afflictive. They don’t have a “shared reality” with the market – they’re misinformed and delusional. They don’t understand that the market is neutral and all it does is provide information. It simply provides feedback based on the collective actions of all participants. So getting upset or angry at the market is wasted energy. Fighting the market won’t produce favorable results. Remember that the market can’t actually hurt us – only we can with our attitudes, perspectives. and behaviors. The same one cent move can be the “perfect buy opportunity” from the viewpoint of one trader, the “perfect sell opportunity” for another trader, but objectively it’s nothing more than a one cent move. In order to flow with the market, we have to acquire an objective mindset.

You Must Know Yourself if You Want to Know the Market:

This is probably the top concept for any trader to thoroughly understand because knowing yourself is the starting point for becoming a consistently successful trader. And by initially knowing yourself as a disorganized, impulsive, undisciplined, fearful, impatient, and inconsistent trader, you gain the self-awareness necessary to evolve into an organized, balanced, disciplined, confident, patient, and consistent trader. Once that transformation happens, you have the frame of reference required to understand the masses. Since you were once part of the herd, you recognize exactly how it thinks, feels, and behaves. As a result, you’re better equipped to predict the actions of the masses and start taking advantage of their emotionally-fueled demeanor by thinking in probabilities.

There’s no doubt that most traders predominantly operate out of fear. As Mark Douglas details in Trading in the Zone, the four main trading fears are 1) being wrong, 2) losing money, 3) missing out, and 4) leaving money on the table. Any time a trader is operating out of fear, it reduces the possibilities in their mind. If a trader fears being wrong, for example, they’ll go to great lengths to avoid closing out a losing trade because that would be admitting defeat. Instead, they’ll rationalize or justify their reasons for being in the trade, and even go as far as breaking their rules by removing stop losses and doubling-down on the position. These behaviors are instinctive defense mechanisms to guard against the pain of being wrong, but all they really do is block the truth. Due to a lack of self-awareness and control, the trader’s fear of being wrong actually makes them more likely to be wrong. It becomes a self-fulfilling prophecy.

3 Assumptions Every Trader Should Make When it Comes to Their Mindset:

According to Mark Douglas, these three assumptions will allow us to constantly update and replace limiting beliefs, if necessary. I’m paraphrasing from the book here, but basically he’s saying that we don’t know everything, our current beliefs and perspectives might not be effective, and those beliefs and perspectives are always subject to change if the environment we’re operating in changes.

Assumption #1 You Haven’t Learned Everything There is to Know

It’s not the “smartest” or “strongest” traders, but rather the most mentally adaptable traders who are the ones that ultimately survive. We’re so used to changing the outer environment to suit our desires, but that’s not possible while operating within the market environment. Since we have no control over the outer environment, we have to change and evolve ourselves to suit it.

You Create Your Own Experience Within the Market Environment:

Overall, your personal attitudes, beliefs, perspectives, and behaviors create your own individual experience within the market environment. If your mindset isn’t aligned with true market characteristics, then there will be conflict between your internal environment and the external market environment. But if you decide to adapt your mindset to align with market characteristics, then you generate the conditions for balance and flow. Most traders spend days, months, and years in a seemingly never-ending battle with the market, and all it brings them is emotional and financial pain. The good news is that it doesn’t have to be this way if they have the self-awareness and desire to change. The internal struggle can finally come to an end with the proper paradigm shift.

Inexperienced traders spend so much time focused on the end result (profits/losses), that they sabotage the two main components of their process: 1) the proper mindset and 2) a validated system. Developing and continuously improving these two elements are the only actions that truly matter. Profits and losses are simply a by-product of having a positive expectancy system and following it with the highest degree of discipline. Unfortunately, most traders complicate the process in innumerable ways, constantly distracting themselves from what matters most. They’re fearful, get tricked into the survival mindset, and give into short-term emotional gratification over-and-over again. But this comes at the expense of being consistently profitable. If they want real change in their trading operations, they have to interrupt their negative cycles of behavior and work on developing the proper foundation for success.

Raise your standards, change your beliefs, and make a real decision to become the disciplined and consistent trader you want to be.