The face of Penny Pro is a professional stock trader of over fifteen years, Jeff Williams. For the most part, Jeff focuses on penny and sub-penny stocks ranging from $.001 to $5.00, so his approach of trading legitimate penny stocks is a bit different from many other services out there that tend to shy away from tickers trading under $1.00. Sometimes, he even trades stocks under $.01.

Penny Stocks can broadly be defined as tickers that trade under $5.00, but you don’t often see traders zeroing in on stocks under one cent. There’s a stigma attached to penny stocks as being dangerous and that trading them is nothing short of gambling. But the fact of the matter is that penny stocks can provide massive growth potential for small portfolios, and that’s why so many individuals are attracted to them.

The #1 Advantage of Trading Penny Stocks:

Profit-Potential: Taking a relatively small $2,000 portfolio for example, the traditional long-term investing route won’t do much for your bottom line. This avenue might return 5-20% on an annual basis at best, which won’t get you very far in the grand scheme of things. Trading penny stocks, however, can often result in portfolios doubling or tripling (100-200% returns) within that same period of time. It’s really the only approach that can substantially build small accounts into big ones in a timely fashion.

Important Note: Trading penny stocks is NOT investing. These aren’t stocks you typically want to buy and hold onto in hopes that they become the next IBM, Microsoft, or Apple. They’re penny stocks for a reason – they’re speculative, have unproven business models, and oftentimes no profits.  Yes, some will go on to become legitimate companies over time, but the majority of them eventually fail.

The right approach involves riding short-term momentum (hold times of approximately 1-5 days) in order to reduce risk, yet capitalize on extreme volatility. With the right education, research, and discipline, penny stock trading does not necessarily need to be dangerous or scary – as long as you follow the right set of trading rules. At Penny Pro, Jeff Williams teaches his members how to do just that.

As a Penny Pro Premium Member, You Receive:

Expert Video Lessons: Hundreds of hours of recorded video lessons and continued education webinars allow novice traders the opportunity to build a strong foundation in various penny stock concepts and strategies. Education simply cannot be overstated. Without it, you will fail – simple as that. So many people lose money trading because they don’t understand what they’re doing. Don’t be that person. Take the right approach that involves education, research, and discipline.

Interactive Chat Room: The focus of Penny Pro is on fast-paced day and swing trades, so Jeff spends much of his time teaching within the chat room: how to scan for trades, enter them, and then exit for a 10-25%+ profit – that’s the overarching goal. It also allows the community of traders to come together in one location, share high-potential trade ideas, and actively help newcomers get up-to-speed. Nobody can watch the entire market by themselves, so it helps to have hundreds of eyes watching various stocks and sectors for attractive setups. 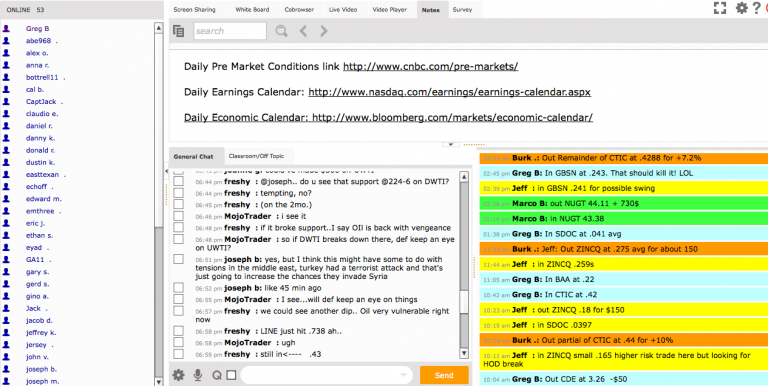 Daily Watch Lists: Watch lists keep members focused on high-probability setups and don’t overwhelm them with too many options on a day-to-day basis. There are over 15,000 stocks available to trade each day on U.S. exchanges – Jeff Williams helps his members cut that number down to five or less. There’s no doubt that most of the hard work in trading comes from research, so Jeff does much of that work for his members so that they don’t necessarily have to.

The Takeaway: Becoming a consistently profitable trader requires hard work – don’t let anyone try to tell you differently. So many traders fail because they buy into “Simple Systems” that endorse “Hot Picks” when the actual focus should be on education and self-sufficiency. Just like anything else, there’s a learning curve for beginners when it comes to penny stocks, but it’s one that can be cut down substantially with the proper guidance of an expert like Jeff Williams and educational platform like Penny Pro.

What is Penny Pro Elite? Take Your Trading to the Next-Level:

Penny Pro Elite was launched due to demand from Jeff’s most committed traders as a service for taking their trading skills and profits to the next level. It’s a small group of traders looking for close personalized mentoring and unmatched education.

You can see firsthand “how” and “why” Jeff makes trades in order to reduce your own mistakes and improve trading efficiency. Here’s what you receive as a Penny Pro Elite member:

Failure is a Part of Trading – Admit Your Mistakes and Learn From Them:

Trading stocks is an undertaking where it’s impossible to be perfect. Winning every single trade is a fantasy – it’s unrealistic. You’re going to have losing trades from time-to-time no matter how hard you work. And while that can be frustrating, it’s important to be able to put your ego aside and cut losses quickly when you’re wrong. Hoping that a stock will eventually turn around is one of the biggest mistakes new traders make.

Just like in baseball, failure is an intrinsic part of the game. The best hitters of all time only have batting averages between .300-.400, meaning they succeed 3 or 4 times out of 10 and fail the other 6 or 7 times. The critical part is leaning from those mistakes so that you can avoid them in the future. Own up to your mistakes, learn from them, and strive to become a better trader in the long-run because of it. 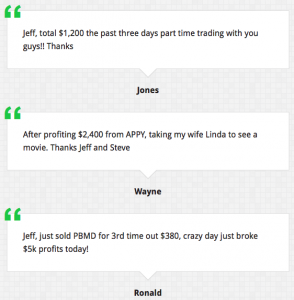 You may come across some message boards claiming that Jeff Williams uses Penny Pro as a platform for promoting stocks, but every single stock trading newsletter out there has to deal with similar criticism.

Yes, Jeff Williams sends out alerts to his subscribers on stocks he already has a stake in, but he’s sending those alerts based on solid technical setups. If you master the concepts covered in the lessons provided, you can certainly find these high-potential trading opportunities on your own.

Conclusion – Is Penny Pro Worth The Cost?

The small cap penny stock arena is known to be the most explosive in terms of volatility, creating tremendous opportunity in portfolio growth for those able to position themselves on the winning side of trades. For less than $2 per day, you can receive an abundance of educational content that can set you on the course to becoming profitable on Wall Street. Small portfolios can be taken to great heights with patient, disciplined, educated, and ultimately successful, penny stock traders behind them.

Jeff Williams had a rough start in trading over 15 years ago, as have many others. He claims to have lost $85,000 when he first started, subscribing to free Pump and Dump services and failing to learn technical analysis. Once he devoted himself to the educational aspect, seeking knowledge as opposed to a “get-rich-quick” strategy, everything turned around for him. Don’t make the same mistakes that he once did. Devote yourself to learning and practice with a Paper Trading Account until you’re comfortable trading real money. There’s no rush. Opportunities will still be out there in the market months and even years from now.