Best Quotes From The Hour Between Dog and Wolf By John Coates: 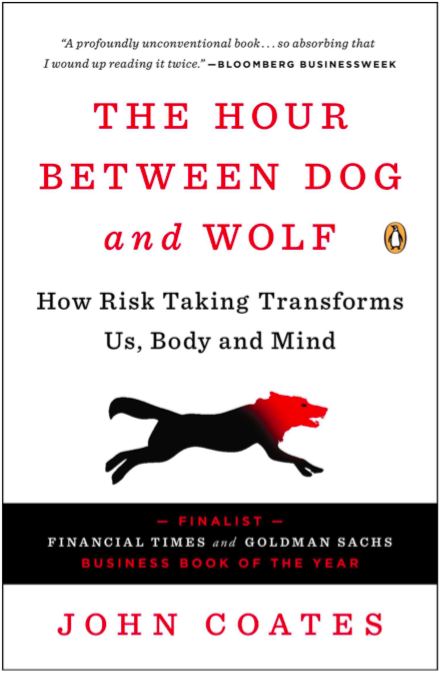 Trading is Much More Than a Purely Intellectual Activity – It’s a Full Body Experience:

The overarching theme of The Hour Between Dog and Wolf by John Coates is that risk taking has an impact on our entire physiology – not just our brain. Most people tend to think trading is purely an intellectual activity, but it’s actually much more than that.

Simply having a well-informed idea or plan isn’t good enough to be consistently profitable. That idea/plan also has to be executed properly in terms of timing and risk management, while dealing with two complex, dynamic systems – your body and the market.

A deep level of self-awareness, as well as market understanding, is what many market participants lack – so it’s no surprise that the trading success rate is less than 10%. Great traders have a level of personal and market depth that the masses simply don’t.

I’ve done quite a bit of research on trading psychology and peak performance (by reading books and taking courses), which has allowed me to learn the benefits of things like mindfulness meditation – and I’ve developed a daily practice that I routinely stick to.

But I’ve also developed a daily routine of physical exercise. Before reading this book, I probably wouldn’t have been able to clearly articulate why I think it helps my trading so much. Now I deeply understand the connections between body, mind, and risk.

In fact – for the last year or so – I’ve chosen to skip trading for the day if I miss either one of my meditation or exercise routines – they’re that important to my overall process and performance (increasing focus, reducing stress, and a number of other benefits).