Thomas Kralow Trading Reviews – Is His Trading Program Worth it?

Most Thomas Kralow reviews are positive. But of course, there will always be some level of haters – no matter how small.

As someone who has been through his Complete Program, as well as dozens of other trading courses throughout the past handful of years, I can say with certainty that his course is far more honest and comprehensive than many others I’ve personally experienced. 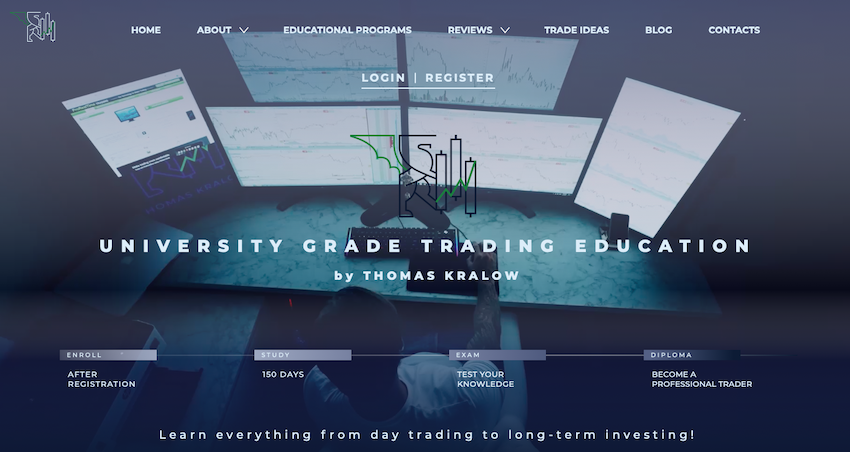 It’s not that Thomas Kralow’s program provides some magical information that no other trading course does. But it’s the transparency about the realities of trading that set him apart. And the fact that he doesn’t just teach some bogus one-dimensional approach.

For example, there are plenty of so-called trading gurus that would be happy to sell you their foolproof indicator systems. But these guarantees of fast and easy profits are just straight-up lies. It’s complete nonsense – but unfortunately, people buy into it.

Thomas Kralow, on the other hand, teaches various critical trading concepts and how to properly combine them into one robust overall approach. It’s not just indicators or key market levels or statistics by themselves – it’s all of them, plus more, put together.

Overall, it’s a program that teaches the authentic path to trading success through proper education, skill-development, and ultimately self-sufficiency. Luckily, it’s not your typical chat room, newsletter, or alert service that’s ineffective for nearly all subscribers.

But if you’re thinking any day trading course will make you an immediate, automatic success – think again. Trading is serious business.

My Personal Thomas Kralow Review – Plus More Than 150 Testimonials From Real Students:

Prior to going through Thomas Kralow’s trading program – University Grade Trading Education – I spent weeks researching him online and watching every YouTube video he had. Then I spent several months actively working my way through his program.

I have to admit that I was extremely skeptical of Thomas Kralow right from the start. I honestly thought he would be yet another fake guru out there pumping his own positions through a chat room and alerts. But that didn’t turn out to be the case at all.

I quickly realized how different his approach was in comparison to the other gurus in the industry – and it was refreshing. He wasn’t bragging about his own trading results or attempting to sell dreams. His messages were rooted in complete transparency instead.

This isn’t specifically related to the content provided within his trading program, but the fact that Thomas Kralow openly shared the details of his net worth says a lot about him as a mentor. Especially in an industry that tends to be secretive and shady.

So it’s not just the students who pay him that benefit from his transparency. He’s literally willing to share his personal struggles, financial situation, and much more for everybody to see on YouTube. It’s hard to emphasize how rare this sort of thing is.

In a space full of get-rich-quick promises, Thomas Kralow is out there teaching the real path – and I immensely respect that.

For those who call Thomas Kralow a scam, it’s usually for one of two main reasons. The first is simply that he sells a trading course. The argument goes that if he’s such a great trader, then why even bother selling a course? Why not just trade if he’s so good at it?

And the second reason naysayers call him a scam is because he rarely day trades any more. So how can he be selling a course that focuses on day trading when he no longer does it himself? To be honest, these questions are completely fair – and I had the same ones.

But after going through his program myself, these concerns subsided. I know I’ve already talked about Thomas Kralow’s honesty, but this is another area where he’s been 100% transparent about his intentions – unlike most other trading gurus.

The top reason he created his trading program in the first place was with the idea of transitioning out of active trading. He did it to replace his trading income – and he’s not secretive about it. He also did it in order to pursue more creative and social ventures.

For example, when you ask almost any trading guru why they sell a course, program, or service – the generic response is that they’re doing it to help people. But that plain, scripted answer isn’t what Thomas Kralow gives. He shares the actual truth.

The truth is that he did pretty well for himself as an individual trader for seven years, but he wanted to pursue new endeavors – like longer term investments and wealth building, as well as creating a hedge fund. These pursuits don’t automatically make him a scam.

In my personal opinion – as someone who has been through Thomas Kralow’s program and many others – I don’t think it’s a scam at all. In fact, it’s one of the least deceptive trading courses/programs that I’ve ever been through. There are no false promises.

In the past, I’ve been through plenty of services that essentially prey on psychological deficiencies. If you’re human, then you probably want to get rich quick. It’s just the law of least effort – we tend to go down the seemingly more profitable, easier path.

But the key word there is “seemingly”. It’s the fancy marketing and ridiculous promises that sell the dreams. That’s why masses of people flock into chat rooms and alerts services – only to realize that trading isn’t nearly as easy as they originally thought.

The honorable thing about Thomas Kralow, on the other hand, is that he goes against the typical pattern of gurus in the industry. Instead of spewing the same old get-rich-quick promises, he takes the straightforward and honest approach with his students.

The best way to see this is right on his website where he routinely makes statements such as “the brutal realities of the financial markets”, “no one simple pattern or structure”, “trading is a marathon and not a sprint”, and “trading is not easy”.

Overall, Thomas Kralow offers a solid learning program for individuals who are serious about taking the time and making the effort to properly learn and build skills. For beginners it might seem like the long path, but it’s the only one that actually works.