What makes Top Stock Picks unique is the recent focus on leveraged ETN/ETF’s. Unlike some of the classic “penny stock” trades Steve LeBlanc used to alert to his subscribers, which would often be characterized by low liquidity, the exchange traded funds he now trades and alerts to his members have ample volume. With this being the case, traders shouldn’t have any issues entering and exiting positions in large blocks, nor should they worry much about slippage on their market orders.

In addition to high liquidity, the setups Steve LeBlanc scans for are easy to follow and he’s always extremely transparent with his trade plans. Alerts come with the exact price he bought in at, number of shares purchased, areas where he’s looking to add,  price to stop out of the trade if necessary, as well as his profit goal in the form of a percentage. Here’s an example of an alert from Steve on DUST before he even enters the trade himself – you just don’t come across this type of transparency often: 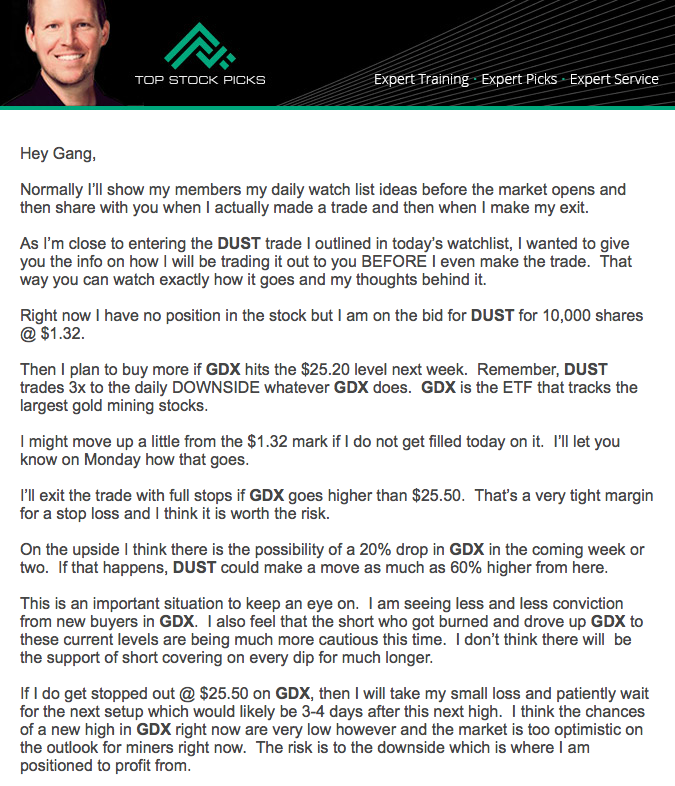 Moving on to May’s Trading Results – Alerts That Anyone Can Follow:

While Steve LeBlanc occasionally takes part in options trading in his Premium LIVE service, only the results from stock trades are listed below. All of these trades were alerted to TSP members in real-time via text and email:

Nearly $8K isn’t bad for the past two and a half weeks of trading (the chart displays every one of Steve LeBlanc’s stock trades since 4/26). Even if you were only able to capture 25% of his results as a member, that’s still a nice chunk of change. Month in and month out, the profits just continue to pile up for the Top Stock picks team.

Looking for easy to follow trades with high liquidity and huge profit potential? Top Stock Picks can provide the watch lists, alerts, and education required to succeed on Wall Street.