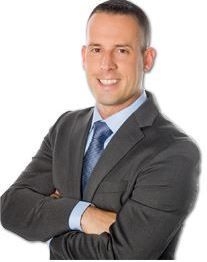 This is by far the most common complaint voiced by JBP subscribers, but you need to keep in mind that blindly following alerts is not a smart stock trading strategy. The small cap stocks Jason likes to trade are inherently volatile, and swing trading is somewhat of a fast-paced approach, making it rather difficult to mirror his trades exactly. What counteracts these factors is that Jason Bond Picks service offerings have always been rooted in the vision of supreme education, and the basis that eventually you will be able to capitalize on great opportunities in the market on your own using the concepts Jason teaches. No subscribers should be relying solely on alerts.

Unfortunately, many people with no previous knowledge or experience in the stock market join JBP just to follow the buy and sell alerts, but to put it simply: they shouldn’t. Jason’s real-time text and email alerts are only one component of his well-rounded service, and your decision whether or not to enter or exit a trade should never be decided solely on the fact that “Jason Bond bought it” or “Jason Bond sold it”. It’s dangerous to join with the mindset of wanting to put the least amount of work in as possible and simply copy Jason’s trades. The most successful approach is to use every educational tool JBP has to offer: real-time alerts, private chat rooms, daily watch lists, video lessons, live look-ins, etc. and tailor the service to fit your individual needs.

You should realize that there’s a number of reasons indiscriminately trying to copy every trade Jason makes may not work for you: Your portfolio value, risk tolerance, availability during market hours, and profit goals most likely differ from Jason’s. The point is that you should be making the trades that make sense for your portfolio size, the risk you’re willing to take, the potential reward you’re seeking, during the times you’re available, and most importantly, for the reasons you personally think the stock price will move. And if your thoughts on a specific stock end up being the same thoughts that Jason Bond has, then great – that’s added reinforcement that you’re “fishing in the right pond”.

It’s also abundantly clear that those who voice this complaint don’t use the daily watch lists to their advantage. I’ve heard someone mention before that “Jason Bond trades in first and out first before notifying subscribers”. But every single day he sends out a watch list detailing his favorite trade ideas with high potential to run. Areas of support and resistance are called out as well, which you should be able to recognize on your own if you’ve watched any of his video lessons. The majority of Jason’s trades come right off these watch lists, which gives you plenty of opportunity to get your desired entries and exits without alerts.

There’s no doubt that his service would work even without the alerts because the real value is in the daily watch lists, video lessons, webinars, and various teachings. The alerts are simply for reinforcement and full disclosure of the trades he makes. Take the word of real members by reading their testimonials. The bottom line is this: stocks move with or without Jason Bond, and it’s very possible for you to take advantage of profitable opportunities in the market if your primary focus is on education.

2. “Jason Bond’s Trades Move Too Fast And Are Too Volatile”:

You need to acknowledge that swing trading is short-term in nature (typically 1-10 day holds), and volatility is exactly what you want if you have any hope of seeing 5-20%+ returns in that modest window of time. If you don’t want these types of returns or aren’t interested in high volatility, then you may want to consider a longer term trading approach. Unfortunately, the S&P 500 has only returned about 13% per year on average for the past 5 years. This same percentage gain or better is the goal every few trades with Jason Bond’s Swing Trading strategy.

In addition, Jason Bond  markets his Long-Term Trading service as “perfect for the busy professional”, characterized by weekly watch lists, more flexible entries & exits, and slightly longer hold times of weeks to months. This is a relatively new offering from JBP, but makes it much easier for those with full-time jobs to implement slower paced swing trading into their lifestyle. This differs slightly from Swing Trading – Jason’s most popular service, in terms of time horizon and profit potential. Please see my detailed Jason Bond Picks Review to compare the differences between the Day Trading, Swing Trading, Long-Term Trading, and Millionaire Roadmap service offerings at JBP.

|Are You a Busy Professional? Discover the Differences Between Swing Trading and Long Term Trading|

Active Swing Trading can still work for busy professionals with the help of limit orders, but if you don’t have the availability to monitor your trades at least a couple times a day it could be a problem. Thankfully, Jason Bond’s attractive spread of service offerings has something for everyone depending on seriousness level and availability during market hours. 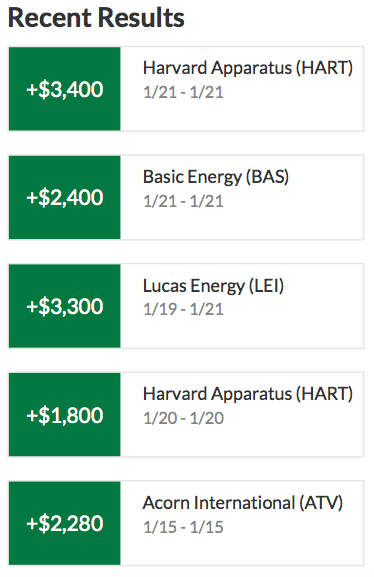 This may come as a shocker to many people, but Jason Bond doesn’t profit on every single trade he makes. In fact, nobody does, no matter how good of a trader they are. Jason is considered an expert and makes money on about 7 out of every 10 trades, which means he loses 30% of the time. By keeping losers small and letting winners run, Jason consistently executes his profitable trading strategy month after month, year after year.

Yes, he does promote his winning trades on his homepage, but that doesn’t mean he shies away from his losses. In fact, he’s published blog posts as well as created video lessons for his clients detailing many of his bad trades. He’s a big believer in the fact that sharing and reviewing his worst trades, as hard as it may be at the time, will only help him and his subscribers avoid those same costly mistakes in the future. It’s a very professional and open approach.

Please recognize that Jason Bond is not in control of your money and JBP is not an automated system for trading stocks, which means you make the calls for your own portfolio. You buy and sell on your own at the times you feel are right. That being the case, self-discipline is paramount. I’ve seen many people choose to mirror Jason’s buy alerts on a stock, but then not heed his warnings or mirror his sell alert when the trade doesn’t go in their favor. They simply hold on in hopes of the stock turning back up again.

Then these people trading on “hope” are stuck in a bad trade that may continue to drop. Meanwhile, Jason already cut his losses early on after realizing the trade wasn’t going his way and quickly turned his attention to better opportunities with higher probability of putting money in both his own and his subscribers pockets. You need to know when it’s time to move on to the next one because the  stocks Jason Bond trades certainly aren’t the type you want to be “married” to and typically aren’t smart long-term investments.

As a swing trader, it’s dangerous to be too attached to any single trade, and you must go into every single one of them with a clear exit strategy. Always respect stop losses and never let trades get away from you. Lack of discipline in your trades is not Jason’s fault. He can only do so much in terms of educating and warning you on the dangers that exist when not exhibiting discipline, but it’s completely on you to manage your own portfolio.

As much as consumers, including myself, enjoy services with “try before you buy” capabilities, it’s hard to justify this option for a service like Jason Bond Picks when you look at it from a customer service perspective. The business is Jason Bond, and requires a heavy time commitment interacting with clients on his part. If JBP offered a free trial, it simply wouldn’t be fair to the loyal, paying subscribers that would be losing a large chunk of Jason’s attention to non-paying newcomers.

As with any product or service, first-time users come with a lot of questions and require extra attention. The bottom line is that Jason Bond wants his focus to be on his devoted client base, and if you’re not willing to pay to give his service a shot then that’s fine by him. There’s simply too much demand for his time and offering a free trial would not only devalue his service, but most likely spread him way too thin. 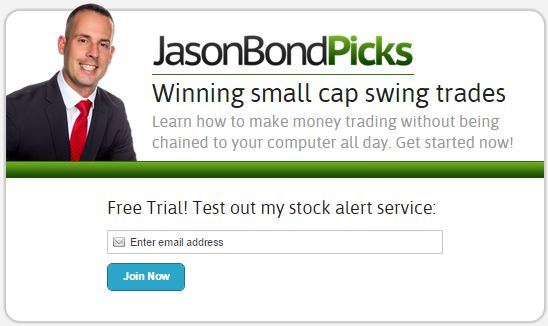 The closest you’ll get to a free trial is the Free Email List, which shares the occasional alert, but don’t expect any watch lists, video lessons, or chat room access on any sort of consistent basis. It’s really only helpful in order to get a feel for Jason’s swing trading strategy and what types of stocks he likes to trade. If you’re lucky, he may send you a 1 week trial offer for $1, but it will never be free. Some outsiders may say his services are expensive, but you need to consider the value you’re receiving in return.

The Wrap Up – Is Jason Bond Picks a Scam?

In the end, even amongst these common complaints, Jason Bond Picks is not a scam in my eyes. Just because you’re a subscriber to one of Jason Bond’s services doesn’t mean you will automatically be successful swing trading. You need to devote yourself to the educational materials and seek the knowledge required to one day be successful on your own. The complainers are those who claim Jason Bond Picks is a scam because they blindly followed his alerts, didn’t educate themselves or exercise self-discipline, and took a hit to their portfolios because of it. No trading strategy out there is foolproof, and there is no system that exists for you to win every single time. The key is to educate yourself the best you can, put the odds in your favor, and capture those 5-20% gains on a consistent basis.

His alerts can be hard to follow because of the fast-paced nature of active trading, but this is the only way to see such extraordinary returns in short periods of time. It’s nearly impossible to capture Jason Bond-type gains with a long-term trading approach. Blue chip stocks that typically produce a small, steady return each year simply don’t make the huge moves that the small-cap stocks Jason likes to trade have the potential to do. These stocks aren’t as reliable and may not even turn a profit each quarter, but they can absolutely skyrocket on big news. Playing the right patterns, entering based on strong catalysts, and limiting your exposure to the market by only holding for short periods of time are all methods of reducing risk with Jason Bond’s swing trading strategy. If you dedicate yourself to learning the basics and are open to not just blindly following alerts, then Jason Bond Picks can turn you into profitable trader.

Do You Have Any of Your Own Complaints, Testimonials, or Questions to Share Concerning Jason Bond Picks? Please leave Them Below.