LQMT (Liquidmetal Technologies Inc): Still holding 1707 shares at $.28. This ones holding well over the $1.30 level and I’m looking for a potential spike as we move closer to the new Apple iPhone launch rumored to be taking place within the next couple weeks. As stated in Previous Watch Lists, this has been a solid run-up play in the past and I’m hoping for the same type of situation to play out yet again. If we see a large enough run-up, I might consider taking profits. But if not, I’ll most likely be holding on for a while longer. This is also a bet on the new CEO who invested tens of millions of dollars of his own money into this company and has landed deals before with big-name companies like Tesla. Low downside risk of an offering with the amount of cash they have on hand. 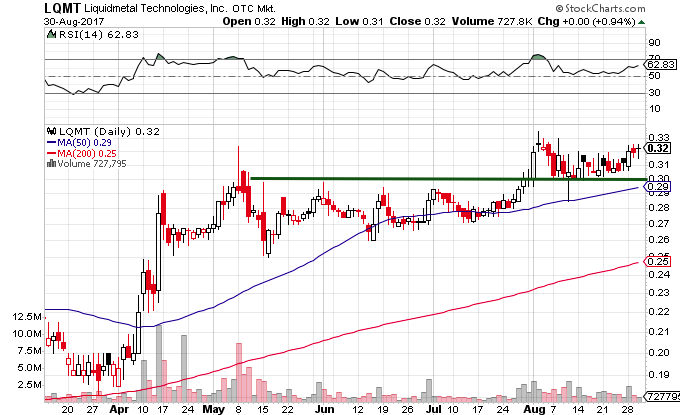 ROX (Castle Brands Inc): I’m giving this stock one more chance and opened up another position. Currently holding 2,000 shares at $1.46. Chart is near oversold territory, MACD appears to be approaching a bullish crossover, and a symmetrical triangle is beginning to form at the $1.40 level. I’m looking for this to break top-side and build momentum back toward and possibly above the $2.00 level. I didn’t think this would wash out like it did Last Week, but I had to respect the price action, stay disciplined, and stop out. My overall thesis on this stock, however, hasn’t changed. Revenues are growing at a rapid pace and I think there’s a high probably of more deals (like the Walmart one) or even a buyout in the near future. But if it starts trending below $1.40, I’ll have to move on to something else. 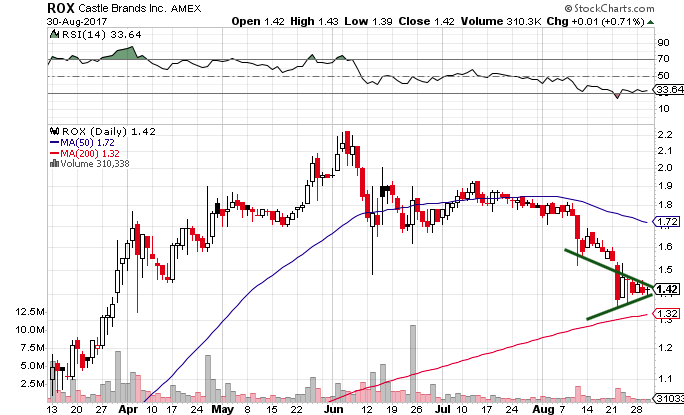 IMMU (Immunomedics, Inc.): I added this to My 8/22 Watch List and entered a position  at $9.55 on 8/23. I exited at $10.15 on 8/24 for a quick 6% gain on an overnight hold. There was much more potential in this play and is exactly the type of setup Kyle Dennis teaches within his BioTech Breakouts service. Strong chart and an even better catalyst. I took my position once it broke above the 52-week high and it was clear that sentiment was bullish. Phase 2 data on their urothelial cancer drug is due out just over a week from now and it appears to be attracting the attention of buyers. It doesn’t get much better than biotech run-up plays like this. You can let the chart define clear entries and exits, and the catalyst provide an exact time frame to work around. It allows me to reduce my risk, but also take advantage of the volatility surrounding the event. 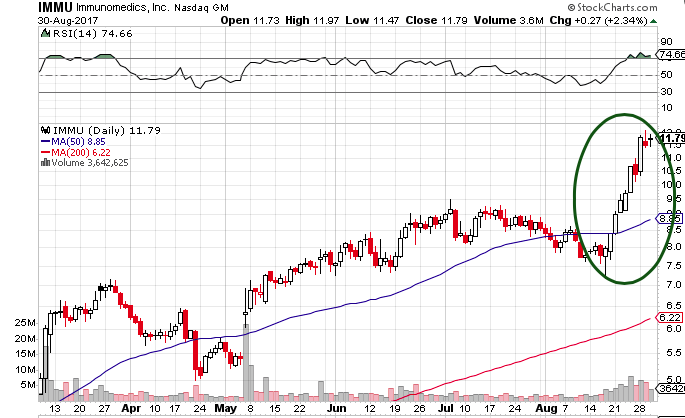 TXMD (TherapeuticsMD, Inc.): Strong uptrend since June. Base forming at a whole dollar ($6.00) level, which is typically strong support. Insider ownership is hovering around 25%, which is a good sign knowing that members of the company have a “dog in the fight”. Short interest is over 35% so it certainly has the potential to squeeze, especially moving into a long holiday weekend.