ROX (Castle Brands Inc): Continuing to add to my position above $1.50. That’s been a strong level of support over the past few months. It’s starting to fade toward that level in a weak market, but I don’t think it wants to fall below it. If it does, I’ll strongly consider stopping out. Now holding 2300 shares at $1.75. It’s unfortunate that this one reported negative earnings per share on their most recent call, otherwise the stock would probably be pushing $2.00 right now – everything else in terms of revenues looked strong. I think the negative earnings were partly due to them increasing their ownership in Gosling-Castle Partners Inc. by over 20% back in March. That of course costs money to do and will negatively impact earnings numbers (at least in the short-term), but seems like it will pay off down the road. I’m giving this one more flexibility than usual since I have a long-term outlook on it. Check Out My ROX Analysis From 8/10. 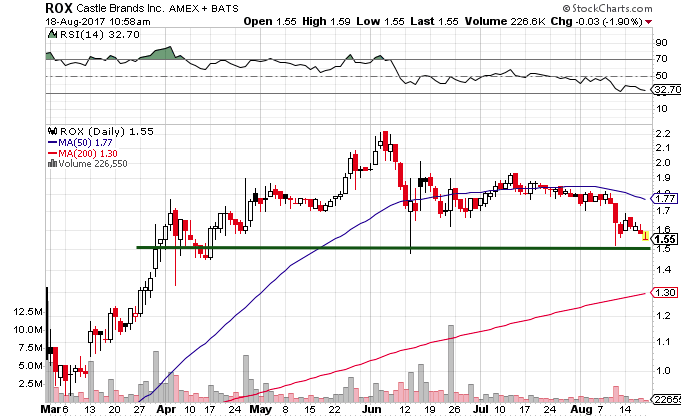 LQMT (Liquidmetal Technologies Inc): Still holding 1707 shares at $.28. My goal is a 25-50%+ move to the upside from my entry. This broke out into the $.30 range not too long ago and I think this will hold as relatively strong support moving forward. As discussed in My Previous Watch List and many watch lists before that, this ticker can tend to get volatile around the time leading up to new iPhone releases. I don’t believe there’s an exact date scheduled on that, but estimates are in the October timeframe (just a couple months away). My position here is also a bet on the company’s CEO who has a track record of signing deals with big-name companies like Tesla. This position has “multiple shots on goal” so to speak, and those catalysts can cause major spikes in a low-priced stock like this. 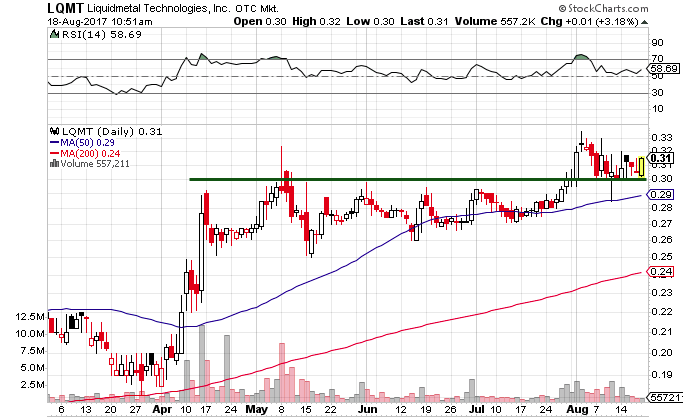 FRED (Fred’s Inc): I stopped out of my position at $6.25 on 8/15 for a 4% loss after it broke below the level of support I was monitoring. Lots of retailers were reporting subpar earnings around that time, which seemed to be really weighing on this one. The sector in general has been struggling over the years with the emergence of internet giants like Amazon taking over. I’ve decided this one isn’t something I necessarily want to be in for the short or long term. Instead of  going against the “death of retail” movement, I’d rather be “sailing with the wind behind me”. So I’m moving my money into better plays. 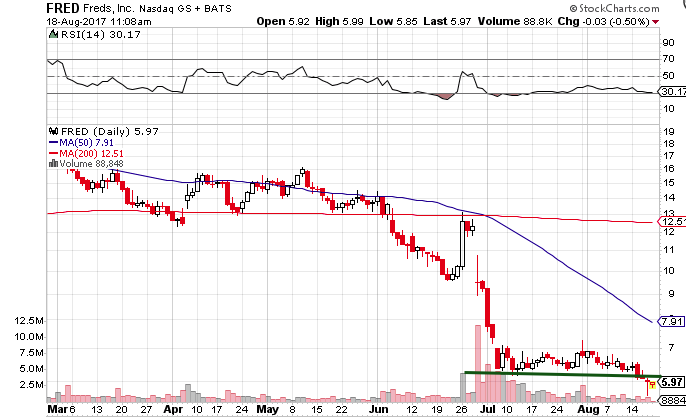 LAKE (Lakeland Industries Inc): Took a short-term stab at this one on 8/9 and exited on 8/10 basically even from $15.66 to $15.70. It gave me a couple opportunities to take profits in the $16.00’s, but never locked it up. I didn’t want it to go red on me, so I booked the small gain (less than 1%). It broke out of the wedge top-side, but Offering News on 8/17 put a damper on it. I’m glad I got out of the way before that happened. It was mostly a technical play for me, so not something I would’ve stayed in for more than a few days. 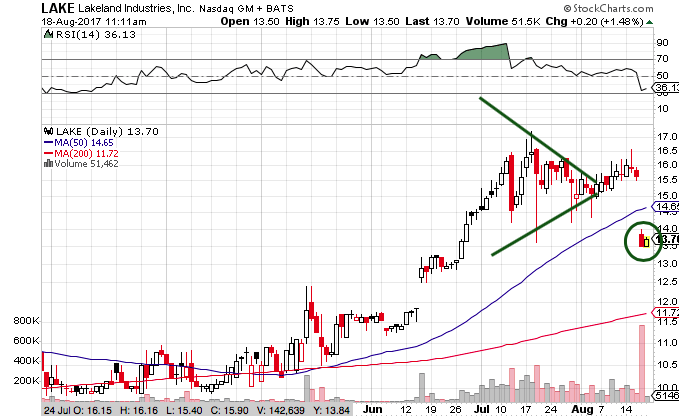 Not watching too many new plays to go long stocks in current market conditions. Wish I stuck with My TZA Thesis from a few weeks ago because the IWM has been struggling ever since – falling from $144 all the way down to $134 recently. That’s the exact move I was looking for but wasn’t patient enough. For the most part, I’ll just be monitoring my two open positions in ROX & LQMT until next week.