Down to Just 4 Open Positions in the Portfolio:

Breakdown of the 3 Positions I Exited:

My average buy was in the low $1.70’s and my average sell was in the low $1.90’s – nice 10% win overall. This play might have more upside above $2.00, but it couldn’t quite break through it recently. I think the fact that this stock is on the SEC 5-Cent Tick Program prevented it from getting friskier than it may have been otherwise. The volatility I was expecting with the upcoming Phase 2 catalyst for Glaucoma just wasn’t there. In addition to that, I want to be out of this before the data is released. With data due out sometime in July, this play only gets riskier by the day. I played the potential run-up and captured a modest gain in the process. 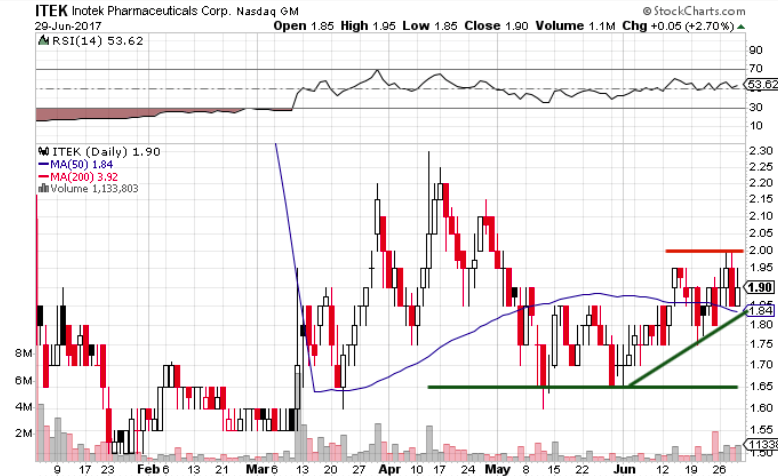 This one resulted in a very small profit for me – less than 1%. Basically a wash, but worth the shot. Over the past couple of months, CYTX has built strong support in the $.90-1.00 region. I had an average entry in the low $1.00 range and it never popped up much higher than $1.10 – until the day after I closed my position of course when it hit $1.18! And then $1.21 the day after that! That was the nice 10-20% move I was looking for, but I just wasn’t patient enough to capture it. Not a huge fan of the drop right back down toward $1.00 even though I don’t hold a position anymore. With Phase 3 data most likely due out in July, I wanted to exit my position and reduce risk before it was released (just like ITEK). 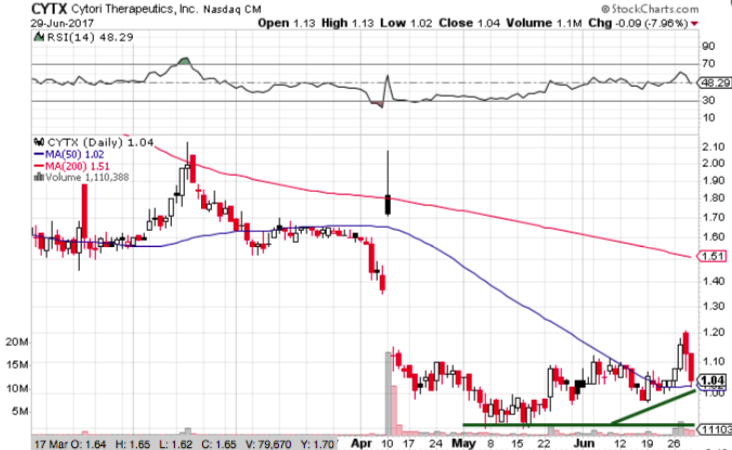 This is the one I’m really kicking myself about in hindsight. It tested me to the point where I almost stopped out a couple of times right below $3.00, but always recovered back over to keep me in the trade. On 6/23 it made a huge move into the $3.40’s and is currently trading in the $3.60’s. Similar to CYTX, this was the solid 10-15% move I was looking for, but I exited my position the day before at $3.20 for a small 1-2% win. Not going to complain about profits, but one more day’s worth of patience could have resulted in a much nicer gain. In the end, green is better than even and even is better than red. 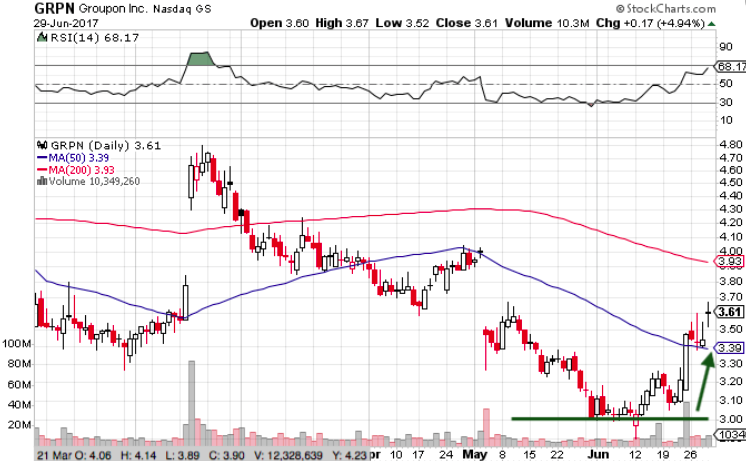 Same thoughts from my 6/19 Watch List. After reporting strong financial results a couple weeks ago, I think this one consolidates in the $1.70’s and works its way back into the $2.00’s within the next few weeks. The technical setup is ideal and buyers appear to be coming in at $1.70. Today was a down market day, yet ROX performed extremely well closing up nearly 5%. This is typically a sign that something is up. Price action like this gets me excited since the stock is a strong takeover candidate and openly exploring avenues to potentially make that happen. As shown by my large position, I have a high degree of conviction that this will trend upwards with an outside chance of a buyout for home run potential. 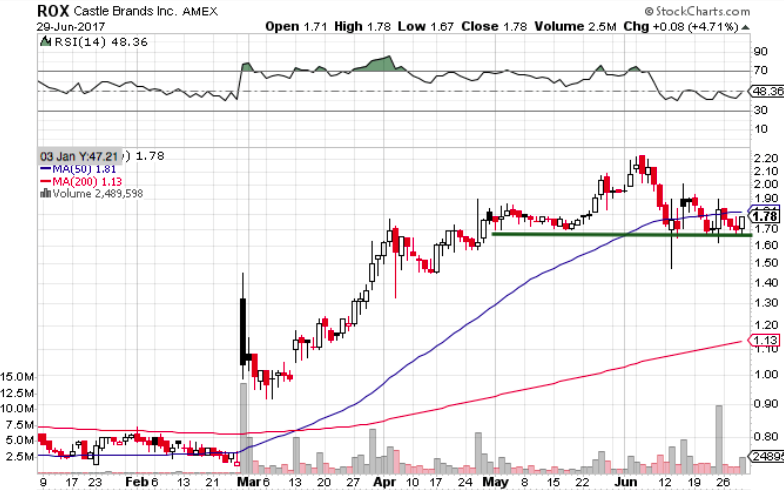 Thoughts are the same as Past Watch Lists. LQMT has been trading in the $.25-.30 range for a couple months now and potentially setting up for a large move to the upside. If we see a drop to $.25 or $.26 then I’ll most likely add to my position. Might even consider adding higher if we don’t see those prices soon. A couple weeks ago, I missed a nice opportunity to add and I don’t want that to happen again. I think the CEO is taking this company in the right direction and new Apple iPhone launches always seem to put a jolt in shares of LQMT. Those launches usually take place in September, so we’re about two months way at this point. Now is the time for rumors to start to swirl. 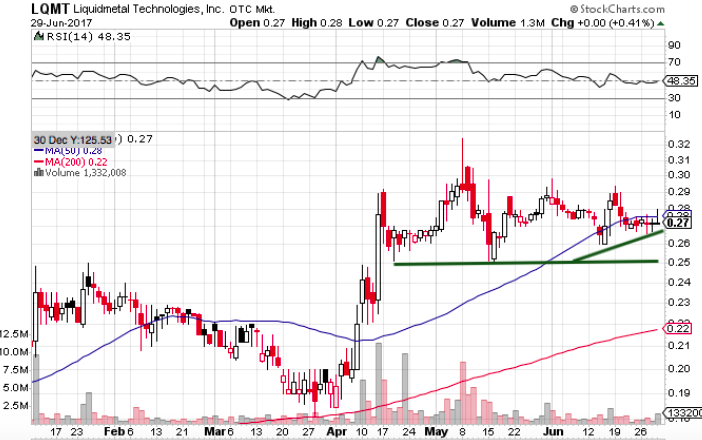 Still like this one above $14.00 for biotech catalyst run-up play. With Phase 3 data for Dravet Syndrome scheduled for Q3 2017, I expect a solid 10-20% before then. The biotech sector (IBB) has been strong and hopefully that continues over the next couple months. When the overall sector you’re trading in is performing well, it’s like swimming with the current as opposed to going against it. I’ve hit nice wins on this exact ticker a couple times already this year and I’m hoping the hot streak continues. 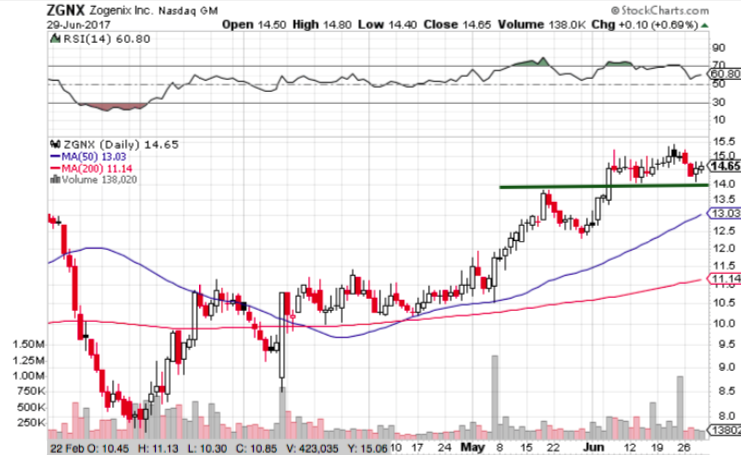 TZA is a bearish play on the small cap index (IWM). The IWM continues to hit a wall in the low $1.40’s and depending mostly on economic factors, we could be in for a large drop soon. One of the biggest short-term catalysts could be healthcare reform. Earlier this week, Senate delayed the vote and stocks weakened as a result. One of the main reasons the market has been up as much as it has been lately is the hope that Trump can make things better for businesses. If healthcare reform doesn’t go through, what does that foretell concerning tax reform? An event like this could change market sentiment substantially. 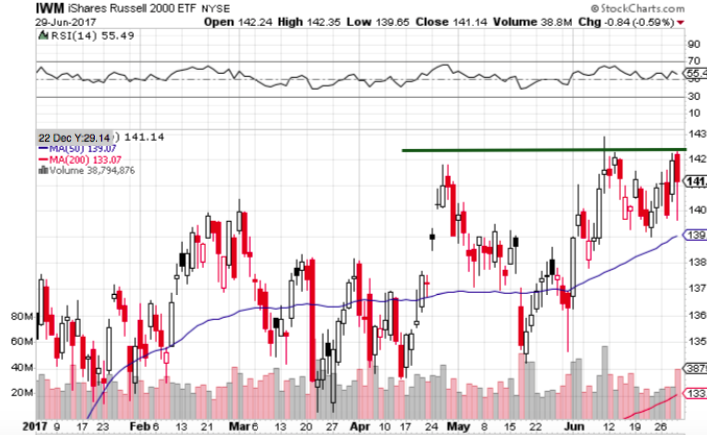