Update on My ROX Position:

Overall I can’t complain too much, but I left a few hundred dollars on the table by not exiting 2-3 days earlier. On 6/7, I actually had a sell order in for my remaining shares at $2.20 (which hit but never filled), and from there the stock started to flush. As a result, I made a few more adds instead above the $2.00 level, but once it moved through $1.90, I had to respect my stop and exit my position.

At this point, I’m looking for a potential re-entry around the $1.50 level, but I’m in no rush to do so. I’d like to see a few days of consolidation (sideways action) first. I have a feeling this one just needed a breather after the strong recent uptrend, but I want it to confirm support over multiple sessions before I pull the trigger on it again. 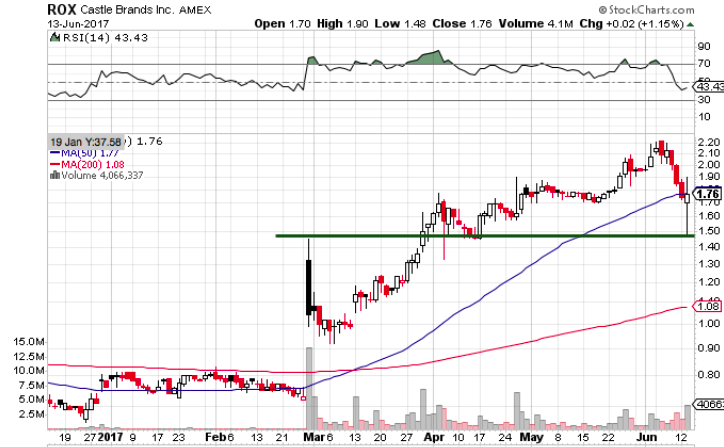 Thesis: This is a stock that I caught a nice catalyst run-up on back in February. Twice I was able to capture double-digit percentage moves between the $8.00-$10.00 range. Those trades can be found here and here. This stock has now broken out into the $14.00 range with support at $13.00. With a couple phase 3 events approaching in the third quarter/second half of 2017, I can see the uptrend continuing over the next couple months.