Here’s a screenshot of the day’s action. I marked up five different spots on the chart that I want to discuss. Keep in mind that the white horizontal lines indicate the initial balance high and low (which are the actionable entry levels for my strategy). 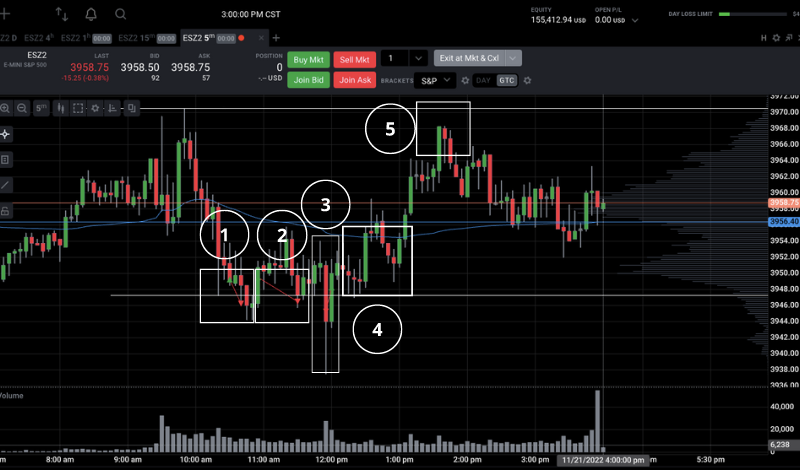 Entered right after 10:30am near the IB low. Had a slight move up in my favor, but then reversed back down for a small loss.

Entered again around 10:55am on a false break of the IB low. Had a nice initial move up into VWAP, but then reversed and retested the IB low yet again. Got stopped out for another small loss and at this point was losing faith in the IB low as support.

After multiple tests of the IB low (see previous 2 trades), failure to break above VWAP, and the point of control migrating down to around 3950 (as opposed to where it started the day at 3960) – I switched my focus to a short entry.

At around 11:55am, I got the impulsive break below the IB low I was looking for and entered a short position. The trade looked really good for the first couple minutes, but then reversed right back through the IB low and held.

4. No Trade on Impulsive Move Back Into Balance and Hold

After having 3 losses in a row and the lunch hour approaching, I stepped away from the screens to regroup. So I missed the opportunity to take another long entry at the IB low – although I probably would’ve been stopped out breakeven on the pullback.

So either way (unfortunately), I most likely would’ve missed the move I was looking for from the IB low toward the IB high.

I had a short entry in at 3968.50 (2 points below the IB high) that missed getting filled by 1 tick. The market drove up to 3968.25 and then reversed back down. I would’ve caught a nice chunk of the move if my order was filled.

Overall – 3 Trades, 3 Small Losses, and a Minor Dose of Frustration:

Overall, I executed the way that my strategy/system/methodology dictates – without any impulse/revenge trades.

But missing out on a coast-to-coast move (from IB low up to near the IB high) and then immediately missing out on yet another nice opportunity by 1 tick (from right below the IB high down to the point of control and VWAP) – is a bit frustrating.

Especially after taking 3 losses in a row. But that’s the way trading goes sometimes. The market won’t just conform to my wants and desires every single day. Success in this game isn’t a straight line – it’s full of ebbs and flows along the way.

A lot of hopeful traders can’t handle these ebbs and flows, especially from an emotional/psychological level – causing them to go on tilt (make bad decisions and trade recklessly). But I’ve been doing this long enough to not let a little frustration get to me.

At this point, I fully expect there to be some form of frustration on a daily basis. There’s almost always something I could’ve done better in hindsight. But there’s no such thing as 100% perfect accuracy in markets. it just doesn’t exist.

So even though I missed a couple nice moves away from IB levels (which are exactly the types of moves my strategy is designed to catch) – at least I kept my risk controlled on the 3 losses and my account lives to trade another day.