I planned on starting up this daily review of my $150K Topstep Futures Combine a few months back, but things have been quite busy lately on both a personal and business front. As a result, this daily report/review got kicked to the back burner.

But this Topstep case study is something I’ve been meaning to perform and document for quite some time. So I’m happy to finally have the time and energy to share my results – and I’ll try to continue to do so on a daily basis moving forward.

My goal is to pass Step 1 and move on to Step 2 by the end of 2022 – and complete the entire Combine process at some point early next year. I’m not focusing on results-oriented goals by saying this – I just think this timetable is a reasonable expectation.

Within this account, I’ve been sticking to one single market (ES/e-mini S&P 500) in order to keep my approach focused and consistent. And each trade I’ve made so far in Step 1 has been no more than one single contract at a time.

I’ll consider sizing up to 2 contracts in Step 2, but I want to show what’s possible without getting too complicated with sizing.

I took a screenshot of the day’s action and marked up four different spots on the chart that I want to discuss. And keep in mind that the white horizontal lines indicate the initial balance high and low (which are my actionable entry levels). 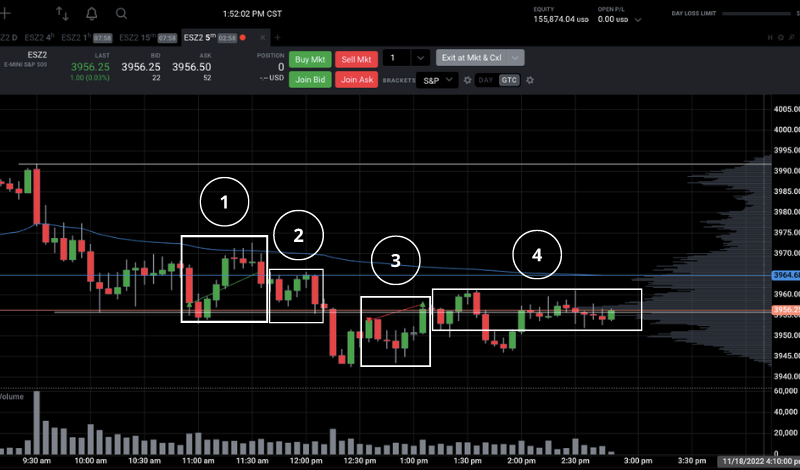 Entered at 10:55am on pullback to IB low. Showed some weakness in the first 5mins, but then had a nice impulse up to VWAP. Couldn’t sustain the move and break through VWAP. Exited the trade for +8pts/$400.

2. No Trade on Pullback to Initial Balance Low

I didn’t take a trade here, but I think it’s important to point out why. If the day’s action was developing differently, there’s a good chance that I would have taken another long entry here. But I didn’t like the structure that was building.

This is an example of “nuance”. The main thing that stopped me was the developing point of control. It was building much too closely to the IB low. I want to see the point of control developing toward the middle of the IB range with volume tapering off at extremes.

After a huge red candle broke through the IB low at 12:15pm, I started look for a short entry on a pullback. I got my pullback short entry at 12:35pm and a nice initial impulse down, but there was a lack of continuation. Small loss. Good trade.

4. Stopped Trading For the Day Due to Indecisive Action

After getting stopped out of my second trade of the day for a small loss, I was noticing a lot of back and forth action at the IB low. That’s not what I want to see at an IB level. I want to see immediate impulse and then continuation away from it.

Since the market was no longer seeming to respect the IB low, I shut the Topstep Combine account down for the day.

My Specific Trading Strategy For the $150K Topstep Combine Account:

I’m approaching the Topstep Combine with a strategy rooted in auction market theory and profiling concepts/principles.

In my personal opinion, this is by far the best way to view and analyze markets. It just makes the most logical sense in terms of how markets move/work. Traditional indicators are no match for the power of profiling tools like volume profile and market profile.

More specifically though, I’m choosing to focus on the initial balance high and low as actionable entry levels. The initial balance is typically defined as the first hour of trade, so I sit on my hands and let that range set the parameters for the day.

Generally speaking, I’m looking for the initial balance range to act as balance and fade the extremes. But if the market gets imbalanced (breaks away from the initial balance high/low and accepts new prices), then I’ll look to join the action in that direction.

It sounds simple, but that’s the point. Again, I want to keep things very simple/specific with this case study to show what’s possible without any complicated components. Just 1 market/product, 1 contract per trade, and 1 specific methodology.

Of course there are some nuances to understand, but it doesn’t have to be exceedingly intricate/convoluted.