First of all, for those of you who celebrate – I hope you had a Happy Thanksgiving. For me personally, it was a nice long weekend spent away from the screens with family and friends. But I’m always excited to get back to it.

Here’s a screenshot of the day’s action. I marked one large rectangle on the chart that encapsulates the five trades I took today. I tried to box off and numerically label each individual trade separately like I usually do, but it made them extremely difficult to see. 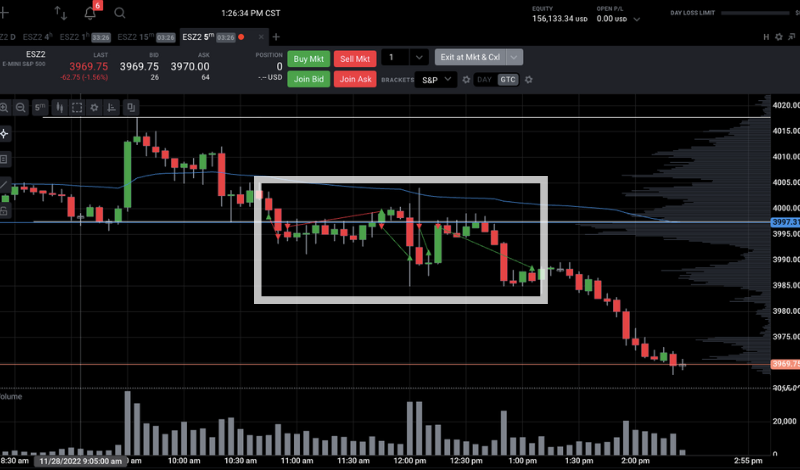 For clarification on my entries/exits: a green triangle on the chart represents a “buy”, a red triangle represents a “sell”, and once both a buy and sell are completed – a green or red line connects them to indicate a profitable or losing trade, respectively.

Took a long at the IB low right after the first hour of trading wrapped up. It bounced at the level for a few minutes looking for support before ultimately falling through the IB low for a small loss.

After getting stopped out of my long position on a relatively large red candle and then the market holding below the IB low for about 10mins, I switched my bias from long to short. This particular trade hit my stop, but it set the tone for the rest of the session.

The market held below the IB low for nearly an hour and was clearly building value lower. So from this trade on, I was stalking short entries. The volume point of control (VPOC) eventually migrated down to about 3995 (outside of the IB range).

I took another short at the IB low looking for acceptance back below the IB low. This trade didn’t look great for the first 5-10mins, but then eventually broke to the downside. Keep in mind that there was a Fed speaker around noon which added some volatility.

After some volatile movement down and then back up, the immediate rejection of the up move and reversal away from VWAP gave me confidence in another short attempt. I entered right below the IB low and locked in another small gain.

On a return back to the IB low, I took yet another short looking for it to act as resistance. The market floated right below it again for about a half hour before eventually dumping. I locked in a decent gain, but there was room for much more.

These are the trades (the 2-3X+ R/R opportunities) that I need to take advantage of in order to lift my equity curve. Much of the time, I’m taking small gains/losses just waiting for these opportunities to occur – so I have to capitalize when they present themselves.

Overall – Best Daily Result Yet Since Documenting This Topstep Challenge:

Since I started documenting my daily Topstep Funded Account Challenge results on 11/18 – this has been my best daily result (+12pts/+$600). But it’s not about the outcome of one individual day. It’s about making good trades over-and-over again.

There’s a lot of short-term randomness at play in markets – which can often reward bad trading and punish good trading (on a short-term basis). But over the long-term, real edge will play itself out thanks to the law of large numbers.

The strategy that I’m implementing with this challenge (based almost entirely on IB levels) only scratches the surface on the power of auction market theory and profiling. So keep in mind that there’s so much more to it than what I’m sharing here.

But even though I’ve drastically refined it down to a fairly rudimentary level, it’s still extremely powerful – and that’s what I want to show with this challenge. When you understand auction dynamics/principles, market behavior becomes incredibly clear.

Since I’m only using 1 contract per trade, I’ve been taking a lot of breakeven and small gain/loss trades along the way. But that’s completely fine as long as I give each trade a reasonable opportunity to pay me at least 2-3X. That’s my focus one trade at a time.