Here’s a screenshot of the day’s action. I marked up three spots on the chart that I want to discuss. Keep in mind that the white horizontal lines indicate the initial balance high and low (which are the actionable entry levels for my strategy). 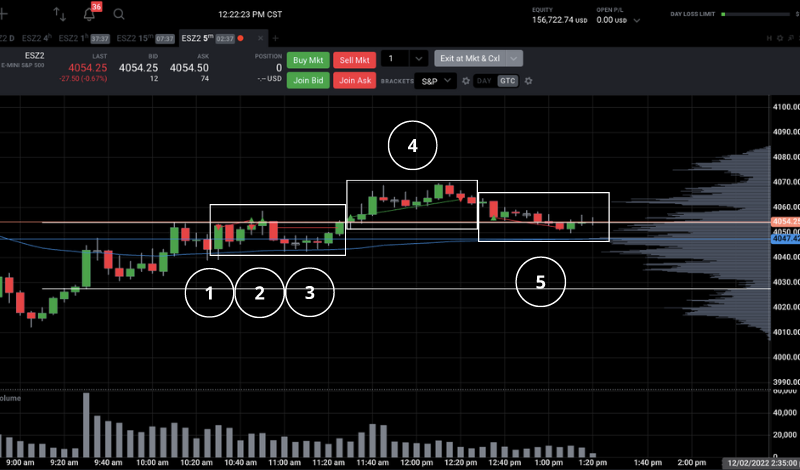 I grouped these 3 trades into one rectangle because they were all shorts at the initial balance high.

I entered the first right after 10:30am. Had a decent initial impulse down, but came right back up to test (stopped out for small loss). Re-entered again, but not much of an impulse on this one (another small loss).

Tried a short one last time on a false break of the IB high – and this one had the most impulsive move down, but couldn’t break and hold below VWAP. Got stopped out breakeven and started looking for long entries.

The market was putting pressure on the IB high all morning, so I entered a long position on a break above the IB high around 11:30am. Had a nice initial impulse and seemed like it might be headed toward my full 20ish point target, but it stalled out.

Entered long again on the pullback to the IB high around 12:35pm, but it just turned into a bunch of chop/consolidation right at that level. Got stopped out for a 4 point loss. The market eventually ran up to 4080+ after 2:45pm, but I was already done for the day.

Overall – Followed My Process, But Ended With a Small Red Day:

With the particular strategy that I’m implementing for this challenge (especially using only 1 single contract per trade), I’m typically taking a lot of small losses/gains or breakeven trades – until the great trades come along to lift my equity curve.

I thought one of the long trades (trades #4 & 5) might be one of those great trades (20+pt gains) that would lift my equity curve, but it just didn’t happen today. Ended with a small loss overall – which I’m completely OK with.

I would take these trades over-and-over again in similar future situations – so none of them were “bad”. Just didn’t get the ideal result. That’s going to happen sometimes. Not every losing day is the result of trading poorly or doing something wrong.

Overall, ended the week up 24 points in the account, which is actually a pretty good result compared to the past few weeks (which were all up/down 5 points or less). If opportunity presents itself, I might be able to hit the +9K profit target next week.