Here’s a screenshot of the day’s action. I marked up two spots on the chart to discuss my thoughts. Keep in mind that the white horizontal lines indicate the initial balance high and low (which are the actionable entry levels for my strategy). 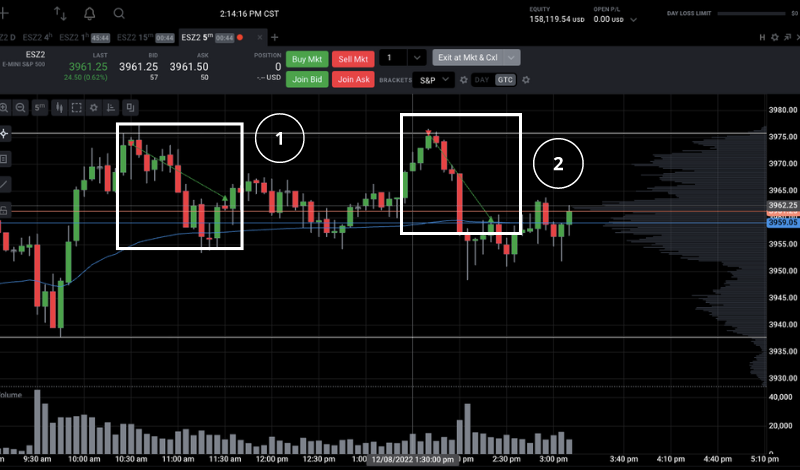 Took a short at the IB high right after 10:30am. Started with a nice 7-8pt impulse down, but then came right back up to test the IB high. It pierced through a bit, but then continued down to VWAP. Couldn’t break below and hold so got out for 10pt gain.

Took another short around 1:40pm. Moved in my favor right from the start and had a really nice impulse down and through VWAP. Adjusted my stop to defend VWAP, but market didn’t want to hold below. Exited for a 16pt gain.

I’ll admit that I was thinking this trade could put me over the $9K profit target for the Combine – and it probably cost me 7-10pts on this trade. I pushed the limits trying to pass Step 1 today and it backfired on me a bit.

Overall – Another Nice Day in the Topstep Combine Account:

That’s back-to-back great days in the Combine account and I’m closing in on the profit target for step 1 (less than $900 away).

I’ve made quite a few errors/mistakes lately (especially in terms of stop placement/movement and not being patient enough) – so I honestly should have passed Step 1 by now if I hadn’t made these errors/been so impatient.

But those mistakes are all in the past now and I just have to learn from them. I’m finally getting in the groove of only trading 1 contract – which I didn’t think would be so hard to do. But I’m just so used to scaling out on moves in my favor.

Hopefully the market provides some good opportunities tomorrow/next week so that I can pass Step 1 and put myself in a position to pass Step 2 early next year. I plan on scaling up to 2 contracts per trade at some point during Step 2.