Here’s a screenshot of the day’s action. I marked up 3 spots on the chart that I want to discuss. Keep in mind that the white horizontal lines indicate the initial balance high and low (which are the actionable entry levels for my strategy). 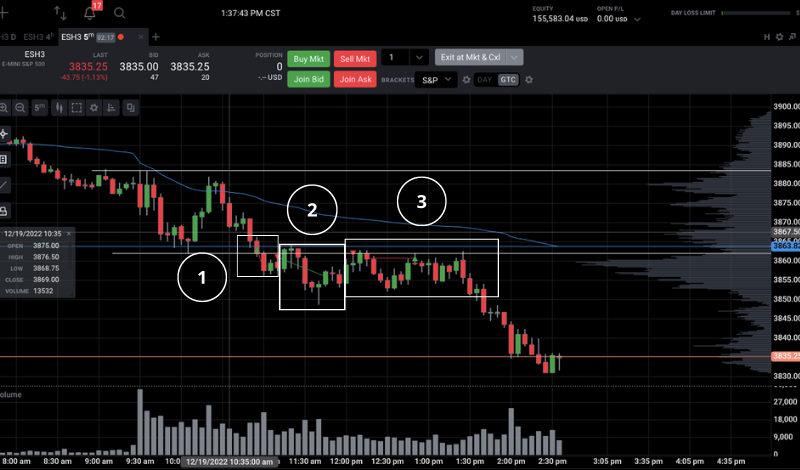 Right around 10:30am, I missed a short entry at the IB high by just a few ticks (which would’ve been a nice gain).

The market quickly approached the IB low – at which point I took a long and was quickly stopped out for -5pts. With the break and hold below the IB low, I started looking for short entries.

This was a nice trade that came close to hitting my 15pt target (missed by a couple  points) and I ended up exiting for +5pts.

At this point, value was clearly developing right underneath the IB low – so I was heavily favoring the short side looking for a larger break. I made 2 more short attempts at the IB low, but I ended up getting stopped out breakeven on both.

This has been happening to me a lot lately where I keep making attempts and getting stopped out on re-tests of the IB level I’m leaning against – only for the market to subsequently break in the direction I’m looking for. It’s been a bit frustrating.

But I just have to adjust to these types of scenarios and do a better job managing only 1 contract per trade. Only having 1 contract to work with has been more of a struggle than I originally thought it would be. But I’ll adapt to pass Step 1.